A most interesting take on The Batman that works so well. We have grown accustomed to seeing the Dark Night as a fully fleshed out character. We expect Suave Bruce Wayne by day and caped crusader by night. Was there not bound to be problems in the beginning, growing pains and doubts. The theme of questions saturates this film with more layers then an onion. Pattinson embodies this character with loathing and angst so well. This film somehow transported me back to the first time I saw Brandon Lee as the Crow and I liked it.  I heard Colin Farrell was in this movie. I never saw him, but I felt his energy. Go see The Batman. Don’t wait to stream it. Sit in a dark theater and spend three hours in this universe Matt Reeves has so skillfully built. 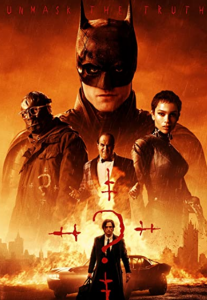