James Gunn has to be the only director in the world that can make us care for a Tree, a Shark, and now an Eagle.  Eagly, Peacemaker’s sidekick is by far the scene stealer of this show.

Cena was a stand-out in The Suicide Squad, an impressive feat considering the cast, and what is crazier yet, he is even better in Peacemaker.  I wasn’t sure what we were in for after watching the first opening dance montage, but Gunn made the “Skip Intro” button obsolete with this series.

I cannot say enough good things about Peacemaker.  It is loud, raunch, gory, heartwarming, and hilarious.  Peacemaker feels perfectly in sync with the spirit and tone of The Suicide Squad, and offers another reason why Gunn’s incredible talents might be the one thing Marvel and DC fans can both agree on.  If you are a fan of superheros or great storying telling, Peacemaker is a must watch. 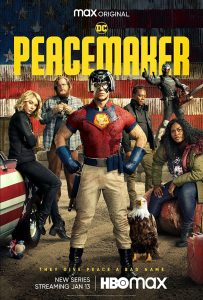