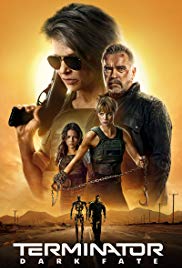 There are a few high points, such as Linda Hamilton reprising her role as Sarah Connor, one she was born to play.  The story doesn’t focus so much on the future that it forgets to tell the story of its current time period.  It also leaves out the messy timelines from the past three movies to keep the plot simple.

Dark Fate has many issues from action to pacing, but it is by far the best sequel since Terminator 2 Judgement day in 1991.  If you are a fan of T1 and T2, this is defiantly worth watching.