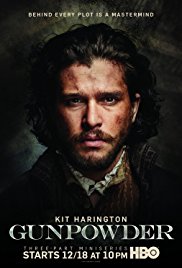 Gunpowder is a TV miniseries that follows Robert Catesby and Guy Fawkes attempt at blowing up Parlement and killing King James I in the early 17th century.

If you are a fan of Game of Thrones, then you will recognize half the cast.  In fact, it feels as if this was a passion project of the GOT crew while on break from filming GOT for HBO.

Kit Harington stars as Robert Catesby, a lord who was oppressed by Parlement for his Catholic beliefs.   Kit delivers a strong performance as always, but it feels he has become type cast in this style of period piece.   The acting and story arc of all the main characters are well thought out and are the highlight of this show.  I was left wanting more from this world that the producers and director were able to develop in only three short episodes.

If you are a fan of period pieces or history, this is the miniseries for you.