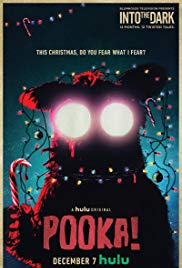 Pooka is a horror story without a sense of direction.  This horror flick is a Hulu exclusive that follows Wilson an unemployed actor who is desperately seeking work.   Wilson decides to take on seasonal work as the mascot for this years hottest new toy – Pooka.  While in costume, Wilson quickly develops two personalities, one of his own and one for Pooka.

Pooka himself is just Tickle Me Elmo gone Rogue.  The lines between Wilson’s personality and Pooka’s quickly become blurred.  The majority of the movie you are working to guess who is in control or what is real.  I was excited by the theme of this movie and the idea of a mascot that the pubic adores being bad, but this movie takes too many turns to truly flush out the terror that Pooka could be.  Some sequences are more laughable than scary.  A few more jump scares or camera cuts could have made Pooka more terrifying.

This movie will leave you guessing until the end, but not in a good way.  True horror fans will be quick to dismiss this movie.  I could see this movie and Pooka himself becoming a hipster cult classic.