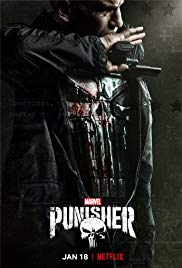 The now cancelled Punisher TV series was one of the bright spots in the Marvel TV universe.   Season two starts off with Frank looking to get his life back on track and possibly make a real connection with someone.  That plan quickly goes south as he is introduced Amy Bendix a teen on the run from trouble.  Frank ends up getting involved helping Amy and things go south quickly.  Most of the season is spent focusing on Amy and Frank’s relationship.  Amy quickly becomes the daughter that Frank couldn’t save in season one.

The season really picks up when Frank is called back to New York by Dinah Madani in order to help track down and kill the escaped Billy Russo (aka Jigsaw).  Frank goes on an epic killing spree in the middle of New York trying to track down Billy, all the while being chased by Amy’s past.

The best thing about this season, Jon Bernthal is a complete beast.  His performance as Frank Castle is one of the best in Marvel’s TV universe.  Even when the script is lacking or Jon has few lines to play, he completely delivers as Frank Castle and steals each scene.

If you are a fan of rip-roaring action, insane gun fights, and a story with touch of heart, then Season two of the Punisher is a perfect viewing choice for you.