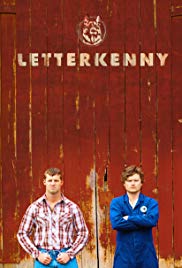 I recently opened a Hulu account.  Most shows have a few advertisements during short breaks.  One of the shows I kept watching always has ads for LetterKenny.  The marketing worked and after seeing the advertisement a hundred times I decided to give LetterKenny a try.

Letterkenny is what I would call a Bro Show.  It is mostly humor for men.  I feel that you could find this show on the old Spike network.  The show follows Wayne and Katy, siblings who run a small farm and produce stand in Canada.  Wayne is challenged to fight most episodes as being the strongest man in LetterKenny is very important to the people of the town.  The back and forth between Wayne and his friends Squirrely Dan and Daryl are the highlights of the show.  After watching a few episodes you will find yourself saying “Pitter Patter” “Not So Bad” and “Hard No” unintentionally.

This is a simple show that kept me laughing through each episode.  If you are looking for a show where you can turn off the outside world and have a few laughs, LetterKenny is the show for you.