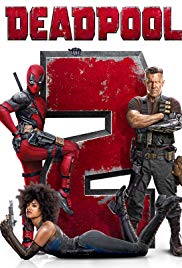 I was very excited to see this since I fell in love with the first DeadPool movie. I love how this first one was shot with the bulk of the movie being on the bridge. Ryan Reynolds killed it in his performance as Wade Wilson in the first one.
That was as far as my excitement went after leaving this movie feeling that it was a movie I had already seen before. Plus I was very disappointed how they REDCONED the whole movie at the end with all the time travel. I feel the overall plot of this movie was weak and the performances other than Ryan’s were not on par. It seems that everyone fell in love with Domino, Zazie Beetz character, but I thought she was more of a disposable character rather than the entire X-Force.
Pros: Ryan Reynolds as DeadPool is the super hero he was born to play. The jokes about the other MCU films hit really well. The opening riff reminiscent of 007 was brilliant. Cable’s look was very cool, he just did not get much of a back story. The special effects were great. The Juggernaut looked great even as a CGI villain. The X-Men cameo was incredible even being very short. Matt Damon’s and Brad Pitt’s cameos were also brilliant.

Cons: It felt like the same movie we had already watched. They relied a lot on the same jokes that hit in the first Deadpool like the baby hand is now the baby legs. We even saw a lot of the same jokes with the Cab Drive and Wolverine that just did not hit this time. I feel the X-Force was a huge waist. The relationship between DeadPool and Firefist felt forced. But my biggest issue with Deadpool 2 was the end credit Time Line clean up montage. Was it funny? Yes, but not needed. At the beginning of the movie Vanessa dies and we spend the next hour watching DeadPool search for something more. Then he uses Cable’s time traveling devise to go back in time and save Vanessa. So he basically REDCONED his whole movie. This upset me the most.

My overall opinion of DeadPool 2: It was a fun movie that we had already seen before.

On a scale of 1-10, I give this movie a 7. Some of the jokes hit and the action scenes were on point.